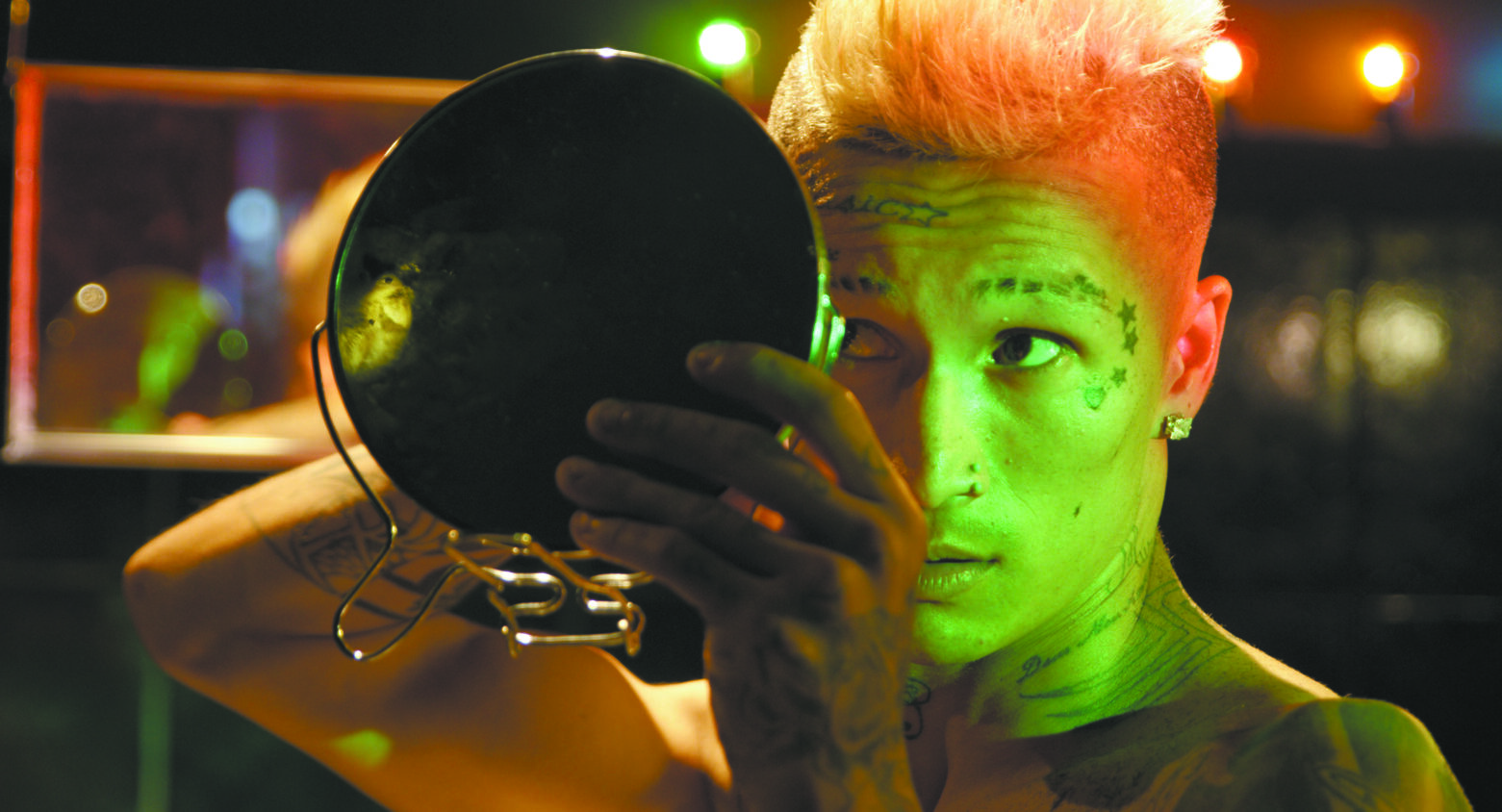 The 32nd São Paulo Biennial took place in Parque Ibirapuera, a rare green space in the centre of the vast and expansive city of São Paulo. The collaborative practice of Irish artist Benjamin De Búrca and Brazilian artist Bárbara Wagner featured among the biennial’s 81 participating artists. The title of the biennial, ‘Incerteza Viva’ or ‘Live Uncertainty’, echoed recent remarks by Brazil’s new president Michel Temer, who stated recently that the years of uncertainty experienced under a Socialist Party government had come to an end. The biennial strongly emphasised ecological and social issues, while a huge educational programme of school visits, tours and special events attempted to bridge the distance between the concerns of the art world and those who inhabit the city’s boundless favelas and low income suburbs.

Under Brazil’s socialist government, led by the much-loved President ‘Lula’ (Luiz Inácio Lula da Silva), millions of people were lifted out of extreme poverty and into the middle classes. The recent political coup – which saw Lula’s successor, the socialist president Dilma Rousseff, impeached from her position and her former vice president Michel Temer take her place – has been compared to the plot of the popular TV show House of Cards because of the intrigue and political corruption involved. Brazilians are concerned at the prospect of a return to the old days of military dictatorship where employment, education and other basic needs were beyond the reach of many families. Equally, a large proportion of the population supports the conservative Temer and believes that he can lift the country out of its current economic slump. In this context, the Sao Paulo Biennial set out its stall. The opening event was marked by protesters wearing “Fora Temer” (Temer Out) t-shirts, with the biennial as a whole seeming to offer an ideal forum for Brazilians to reflect on the social, political and ecological uncertainties of the current era.

Bárbara Wagner and Benjamin De Búrca’s work Estás Vendo Coisas/You Are Seeing Things is an ebullient, noisy, colourful and poignant work – part video documentation, part sci-fi fantasy – which focuses on the ‘Brega’ scene. Brega is a style of Brazilian music, popular in the north-eastern city of Recife where the artists are based. In Brega culture, the participants are preoccupied with their own image and maintaining their appearance is paramount. I spoke with the artists just after the biennial opening in São Paulo*.

Rayne Booth: Can you give me some background to ‘Estás Vendo Coisas’? When did you come across the Brega scene and how did the project come about?

Benjamin De Búrca: In 2012 Bárbara undertook funded photographic research with the aim of documenting the social and economic shifts that were taking place under President Lula’s governance. His leftwing Workers Party (PT) had introduced a series of reform programmes to better the lives of the poorest in Brazil. These measures were largely successful and Brazil witnessed a moment of unprecedented prosperity. The middle classes ballooned and for the first time many people had access to basics such as running water, employment, technology, the internet, television, cars and further education.

Bárbara’s background in journalism and her ongoing practice in social documentary photography led us to the places where this new sense of possibility and hope was most palpable – in city centres and high streets where people shopped and ate, and in the late-night bars of downtown Recife. During the day we developed the work Edifice Recife (which was shown during EVA International 2014) and at night we were in the nightclubs. Bárbara entitled this photographic series Jogo de Classe/Class Games, but during this period we realised that photographs alone would not suffice. The need to make a film, and the potential of the burgeoning Brega music scene, seemed to offer points of convergence in addressing these enormous social shifts.

RB: Bárbara, you have worked in the Recife area for 10 years. Can you tell me more about your earlier work there and how things have changed?

Bárbara Wagner: All my life I have been observing people in the northeast, exploring the idea of progress there and looking at how they are adapting their traditions into this new form of work as spectacle. As artists, our research is around the body: we perceive this generation as having knowledge in their bodies. It is also about managing an economy of material images.

Lula’s first programme in Recife in 2005 was to vacate Boa Viagem, an area of slum housing on the beach. He replaced the beach dwellings with a kilometre-long strip of asphalt – a gesture that changed the whole dynamic of the city. People from the city’s peripheries started going to the beach at weekends and every Sunday for two years I documented what was going on there. In the end, I didn’t even photograph the new buildings or the avenue itself; I was interested in the people and how they were assuming a form of civility: living, participating, existing.

At the time, mobile phones were expensive, so people didn’t have access to cameras and were not used to digital images. I had just bought a digital camera and every picture I took could be previewed by the performers. Often they would perform again in order to look better in my photograph. My first work, Brasil Teimosa/Stubborn Brazil, became emblematic of that era of photography. This series is not too distant from the work of photographers like Rene Djikstra and Martin Parr, and touched a lot of people because they had so far been completely underrepresented. However, with the government at the time I was sensing a powerful shift. Obviously there’s kind of a regression with the current government – it’s not a bright future – but Lula managed to lift a whole section of the population to a slightly higher level of existence.

RB: How did your collaboration emerge and how has it evolved?

BDB: Our work comes from different backgrounds. I studied painting in Glasgow but my practice encompassed many disciplines including video, photography, painting and collage. I was doing a lot of collage when I met Barbara and the principles of collage permeate my work, including the films that we now make together. In 2015 we made a work called Faz Que Vai (Set to Go), which is very much a film collage. With my background in fine art and Bárbara’s in journalism and documentary photography, we essentially see the world in very different ways and create collaborative work that neither of us would produce on our own. There is some arguing of course, as we each endeavour to have our visions understood by the other; however, it is this tension that ensures mutually agreeable end results. Another influencing factor is that Bárbara is dealing with subject matter that is familiar to her, whereas I am coming from a different background and often experiencing things for the first time, which can bring a degree of objectiveness to her subjectiveness and vice versa.

RB: How does your work sit within the wider themes of the biennial?

BW: I didn’t think that my practice as a documentarist would fit with this biennial, but the assistant curator Julia Rebouças (whom I had worked with in the past) invited me, based on the recent film myself and Benjamin had developed. Julia told us that they were visiting indigenous communities in Amazonia and Africa to learn about their understanding of death and how their rituals are connected to nature, which made me realise that the themes of the biennial are quite relevant to our work. We address other forms of nature, that of image, as well as the younger generation’s constant negotiation of who you were, who you are and what you want to be.

BDB: When we were invited to take part in the biennial, we were not really given a brief or told what the biennial was ‘about’ in curatorial terms. When installation began, both Bárbara and I felt a little alienated, especially considering the prominence of ecologically-themed works across the show. However, the more I learned about the other artworks, the more I realised that our film was well-placed among works by artists such as Cecilia Bengolea and Jeremy Deller, Luiz Roque and Vivian Caccuri. Collectively the works in the biennial convey anthropological concerns linked to how we as a species choose to organise our environment, deal with the natural world and maintain spiritual harmony amidst the ‘live uncertainty’ of global climactic realities.

*This is an edited version of a conversation that took place between Rayne Booth, Bárbara Wagner and Benjamin De Búrca in September 2016.

Rayne Booth is a curator, arts manager and Director of Dublin Gallery Weekend. She is currently on a one year career break from her role as Programme Curator at Temple Bar Gallery and Studios, and is living and working in São Paulo, Brazil.

Bárbara Wagner is a Brazilian photographer and Benjamin De Búrca is a visual artist who works across several disciplines including painting, collage, video and installation. Their collaborative practice uses photographic and filmmaking processes to examine class relations in contemporary Brazil.