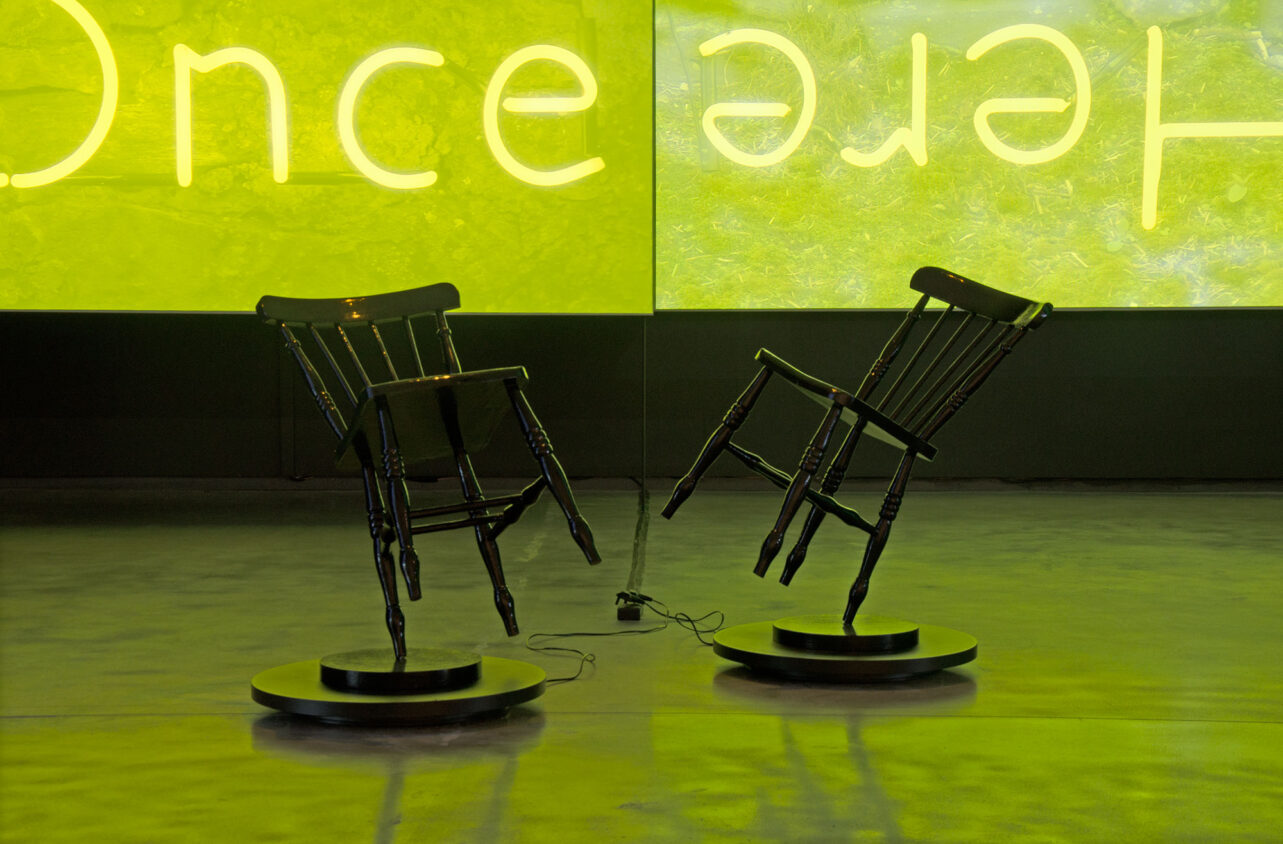 Joanne Laws: How do you approach research and what are some of the prominent themes that have emerged within your moving image practice to date?

Kevin Atherton: The ‘research’ word has entered the vocabulary of visual artists when they talk about what they do, resulting in a conflation of practice and research, which has led to a lot of posturing and confusion. I hear artists’ talk about doing their research and frequently what they’re referring to is old-fashioned ‘resourcefulness’. As regards my research, I’m not sure whether I do research at all or, alternatively, that I’m doing it all the time. My 2010 Visual Culture PhD – titled: Atherton on Atherton, An Examination of the Self-Reflexive Role of Language in Critically Examining Visual Art Practice Through a Consideration of Kevin Atherton’s Work – was intended to contest the relationship between the written and the visual. It was also intended to challenge the notion of visual art research. The prominent theme in my work over the last fifty years has been identity.

Frances Hegarty and Andrew Stones: We don’t have a tidy research-to-outcome approach. We have constantly to reconcile two individual perspectives, each with its own complexities. We allow for some disorder, and a lot of ‘working out’ or testing of half-formed propositions. One of our projects – ‘Tactically Yours’ at Butler Gallery (23 June to 29 July 2007) – was partly about this process. Typically, we begin with a site or object that has sparked our joint interest (such as a plot of land, or a destroyed factory). We usually find that we have different investments in the object, but we establish enough common ground to devise, say, a durational image, or a series of performative gestures, specific to it. Our early energy thus goes into action that produces something new (usually recordings of some kind). We interrogate the emerging material with reference to what could be called a joint body of knowledge. Either one of us might have to incorporate elements that seem counter-intuitive, or antagonistic. For instance, we’ve each had to question our individual senses of national and cultural belonging – our own nostalgias. Many ideas do not survive in their original form. For exhibition we want, primarily, to create an involving field of affect, to engage the viewer in a thought and felt response to the ideas that have occupied us, whilst making the work.

JL: Can you outline some of your technical requirements – such as access to production equipment or editing facilities – and how these impact on the format of your films?

KA: I worked out fairly early on in my career that my position as a film maker was in front of the camera lens, rather than behind it. Since 2014, I have been making videos that include some of my early films and videos. Re-entering my earlier works can sometimes feel like standing on a moving Möbius strip, where the past and present intertwine and become very complicated. I feel that as the maker of some early examples of ‘Expanded Cinema’, I set certain things in motion in the 1970s, and that I’m catching up with them again now. This means that I need a good technical person, both to record and edit what I do, but also someone who ‘gets it’ and ‘gets me’.

FH and AS: Our video and audio production is in-house and digital. As artists who worked with tape in hired edit suites, we really enjoy having a fluid, ongoing moving-image practice that’s not reliant on up-front production funds. However, our finished works are highly dependent on their manner of exhibition. It’s necessary for us to be at least as engaged with technologies of planning and installation as with video/sound editing. Our latest exhibition ‘The Land That…’ at The MAC, Belfast (12 April – 7 July) involved nine video feeds, with as many screens, multiple audio feeds, objects and automated lighting. We had to think in terms of parallel timelines, and degrees of synchronisation and slippage, as we sought to animate multiple spaces without the whole becoming confusing to the senses. Whilst we were editing video and sound, we used a virtual 3D model to visualise the whole work in the gallery. In the final phase, we drew on the commitment of the exemplary team at the MAC to realise in reality what we’d modelled in virtual space.

JL: Each of you has films that feature in the LUX collection. How important are international archives and distribution agencies in the promotion of artists’ moving image practices and discourses? From an archival perspective, how have you dealt with film formats and technologies becoming outmoded over the years?

KA: In the 1970s, I used London Video Arts (who became LUX) to distribute my work and, more unusually in the1980s, to produce it. Now LUX has copies of these and other more recent works of mine in their collection. I have been in a couple of group shows at the Whitechapel Gallery and the ICA in recent years where the work was sourced from LUX but despite this, I don’t feel that they actively promote me. If a curator was pursuing a particular theme, then I like to think that LUX might point him or her towards my work. The future proofing of time-based work isn’t an issue restricted to technical concerns. For work to prove to be prescient, its subject matter will determine its relevance in the future.

FH and AS: Even when they’re legitimated on grounds of inclusiveness, archives can still be used very selectively. If the discussion of ‘archives and distribution’ includes ‘history and exposure’, then it also involves power and representation around artistic culture more generally. Do the rules of inclusion/exclusion that apply to art in general also apply to moving image? Should it be a special case? On a practical note, we don’t know of an archive that’s really met the challenge of representing multi-screen installation works after exhibition. Further, if the focus is on mere media-specificity (it’s film, it’s video) or the technical issue of ‘future-proofing’, then the detailed cultural context around the archived work can be neglected. As far as we can tell, having work in archives has not brought us much exposure, in terms of exhibition. Our work is discussed in academic writing, often on the basis of its concerns and effects, as much as its being film or video. To respond to that kind of interest, we try to maintain our own archive, to keep our works accessible in digital form.

JL: Perhaps you could discuss your current work and any future plans?

KA: Last year I collaborated with the Museo internazionale delle marionette Antonio Pasqualino in Palermo on a puppet version of my on-going video/performance piece, In Two Minds (1978–2019). I worked with a skilled puppet-master at the museum who made two marionettes for the project. These puppets of me at the age of 27 and me now as an old man, are dressed identically but the younger one still smokes. Having had the two puppets made to be in a new video, I’m now interested in using them to make my work for me. I am eager to see what ideas they might come up with.

FH and AS: ‘That Land That…’ at the MAC is the culmination of several years’ work. It can be reconfigured for other spaces. We intend a compilation film of works made “in and of” Ireland: Overnight Sensation (Belfast, 2001), Ex Machina (Carlow, 2006) The Land That… (Donegal, 2010–15). That would be for cinema screening, with surround sound. Meanwhile, Frances is embarking on new studio work, involving large drawings with related texts; Andrew is working on twin and single-screen video works, audio and musical works, and an online collaboration with Derry-based artists Locky Morris and Conor McFeely.

Frances Hegarty and Andrew Stones each have individual practices spanning several decades and have worked collaboratively since 1997.